Marrakech Souq is the biggest Berber market place in Morocco, and has changed little over several hundred years, since its creation in the 11th Century. The souqs of the old medina (city) are surrounded by a 19km wall which has 12 impressive entrance gates to ease the flow of traders passing through this important North African hub. 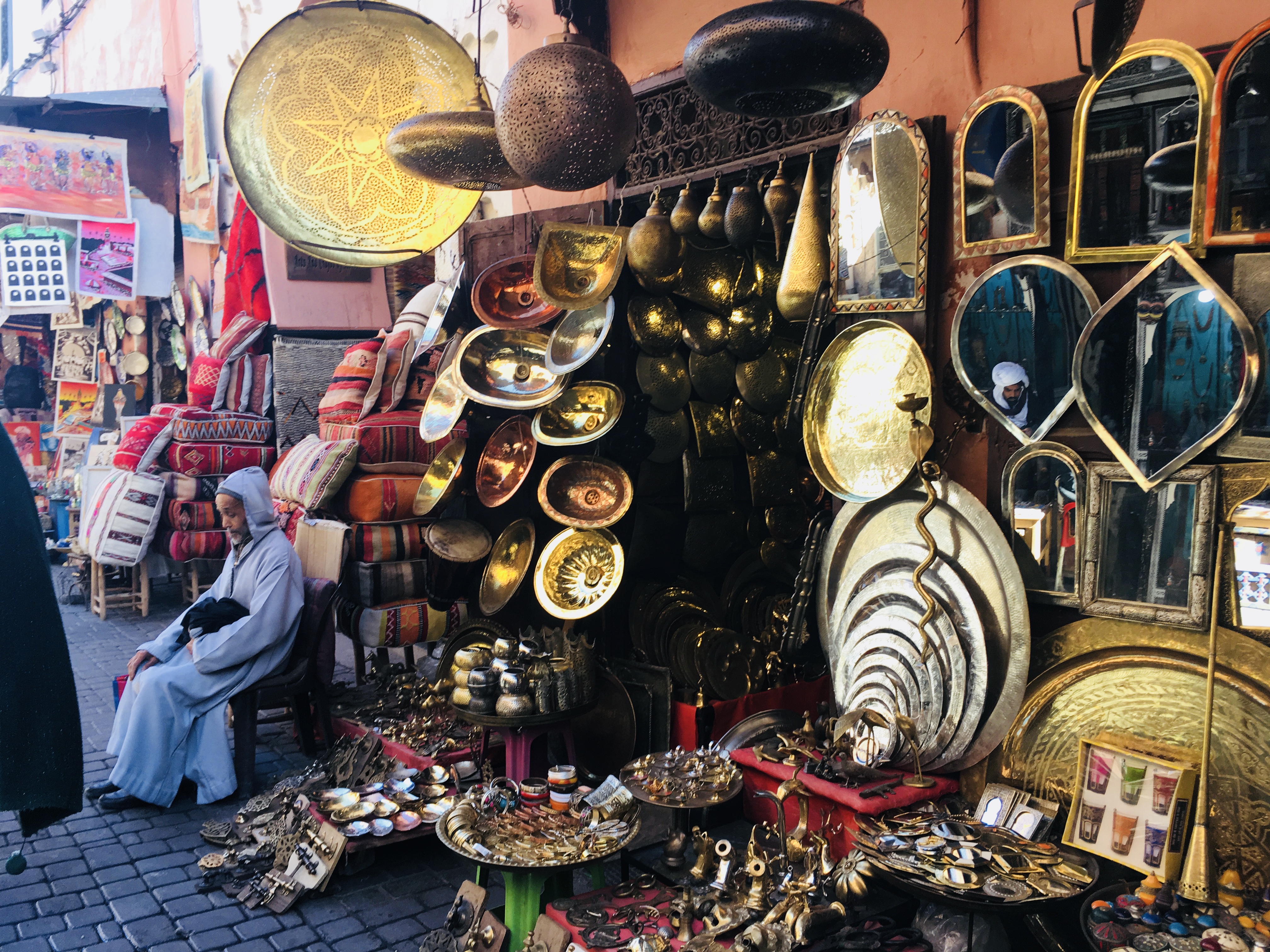 It’s difficult to express the scale of the labyrinth of tunnels and alleyways dissecting the city, but my feet were definitely talking to me after we had spent around an hour searching for one particular historical madrasa (Quranic school). Eventually, almost dead on our feet, we found it…… and it was closed for renovations! 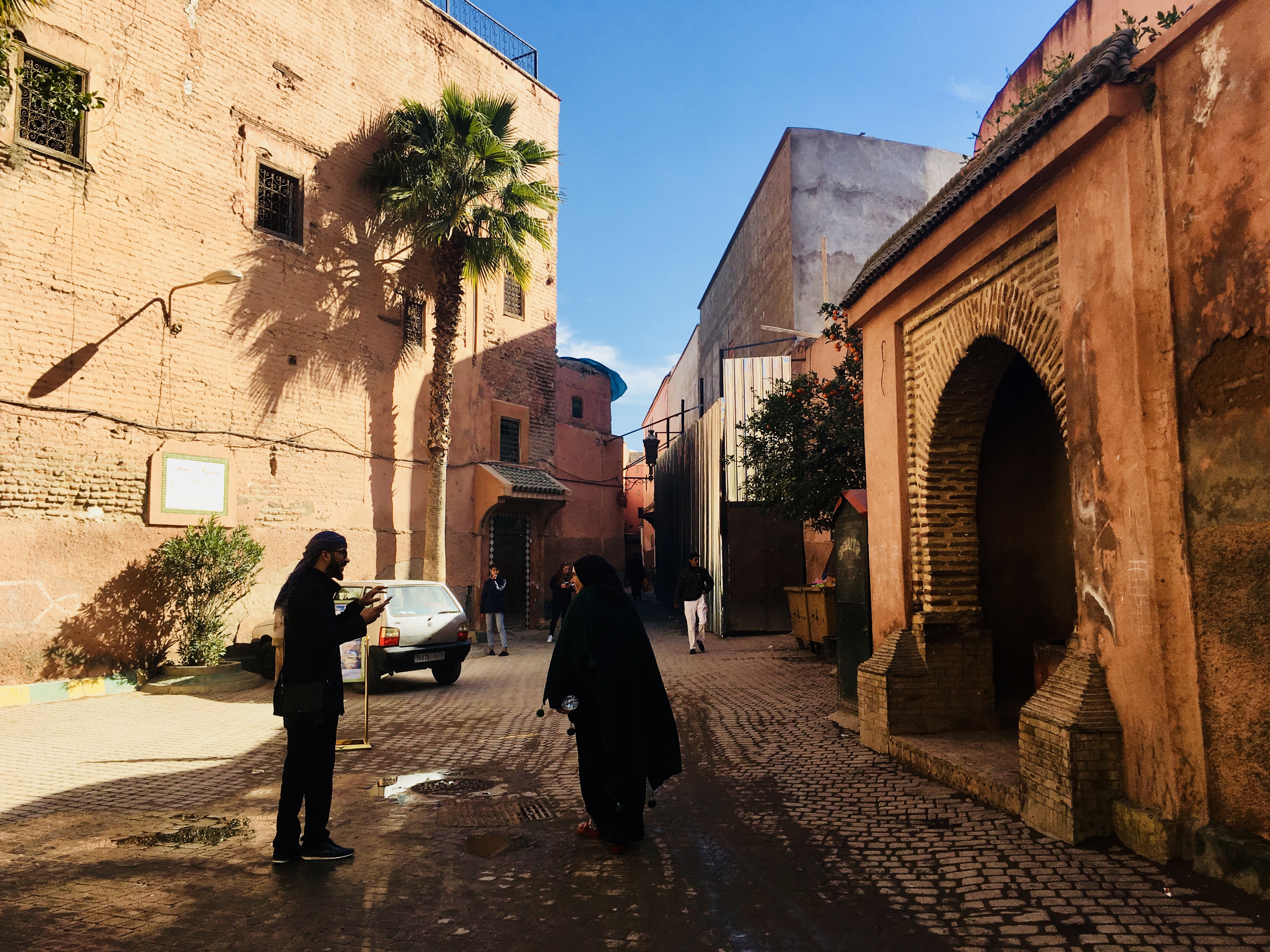 A little frustrated, but certainly better acquainted with the markets of Marrakech, we headed back to the car. I had heard much about the beauty of the Yves Saint Laurent House and Garden and so it was there that we headed next. A few minutes out of the centre of the city, this walled sapphire jewel is, in fact, called le Jardin Majorelle, as it was first created by Orientalist artist Jacques Majorelle in the 1930s. 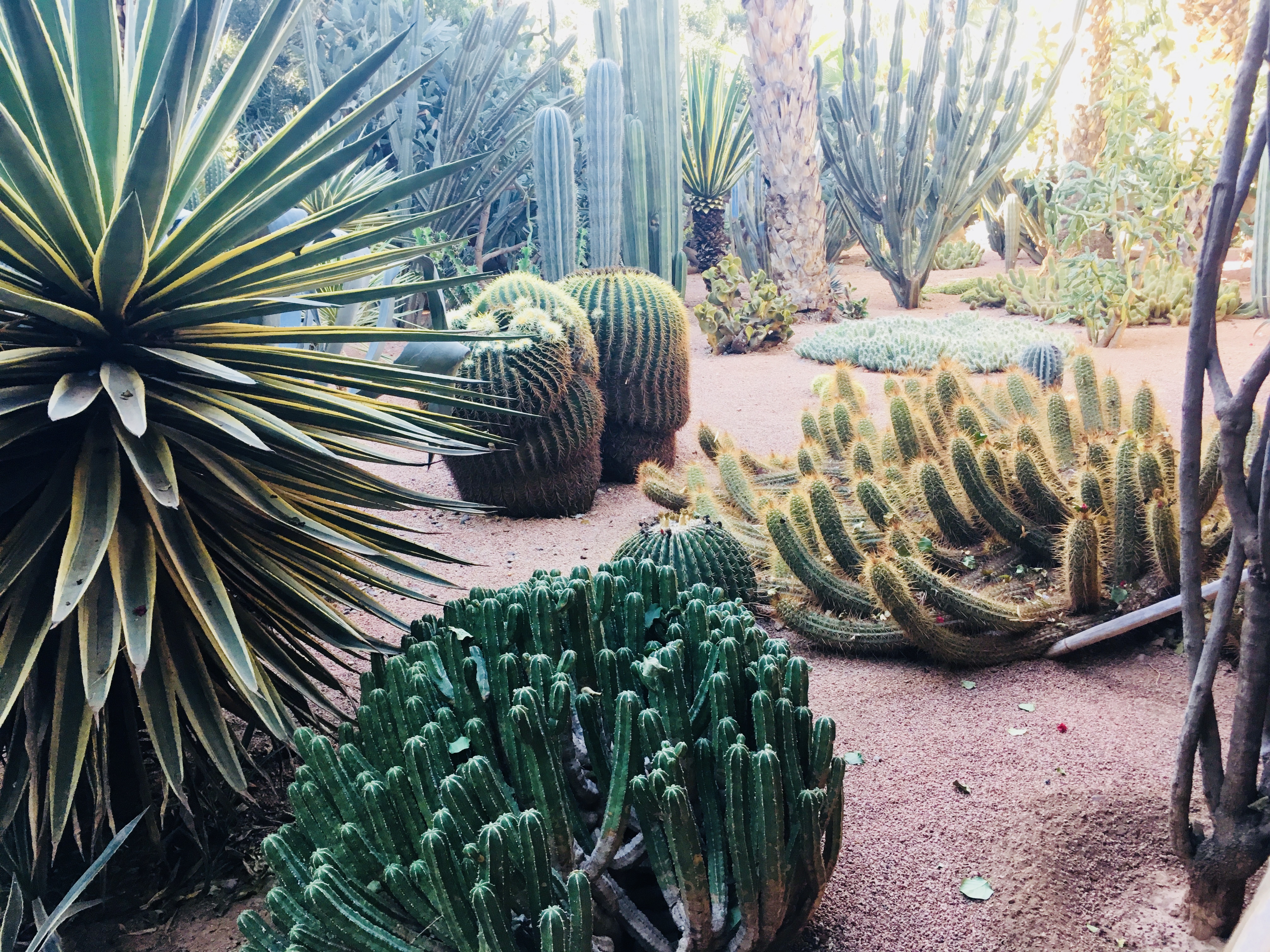 Designers Yves Saint Laurent and Pierre Berge purchased it in the 1980s and restored it to its current glory. Its a two and a half acre space of breathtaking botanical beauty, juxtaposed against stunning Moroccan blue cubist architecture. 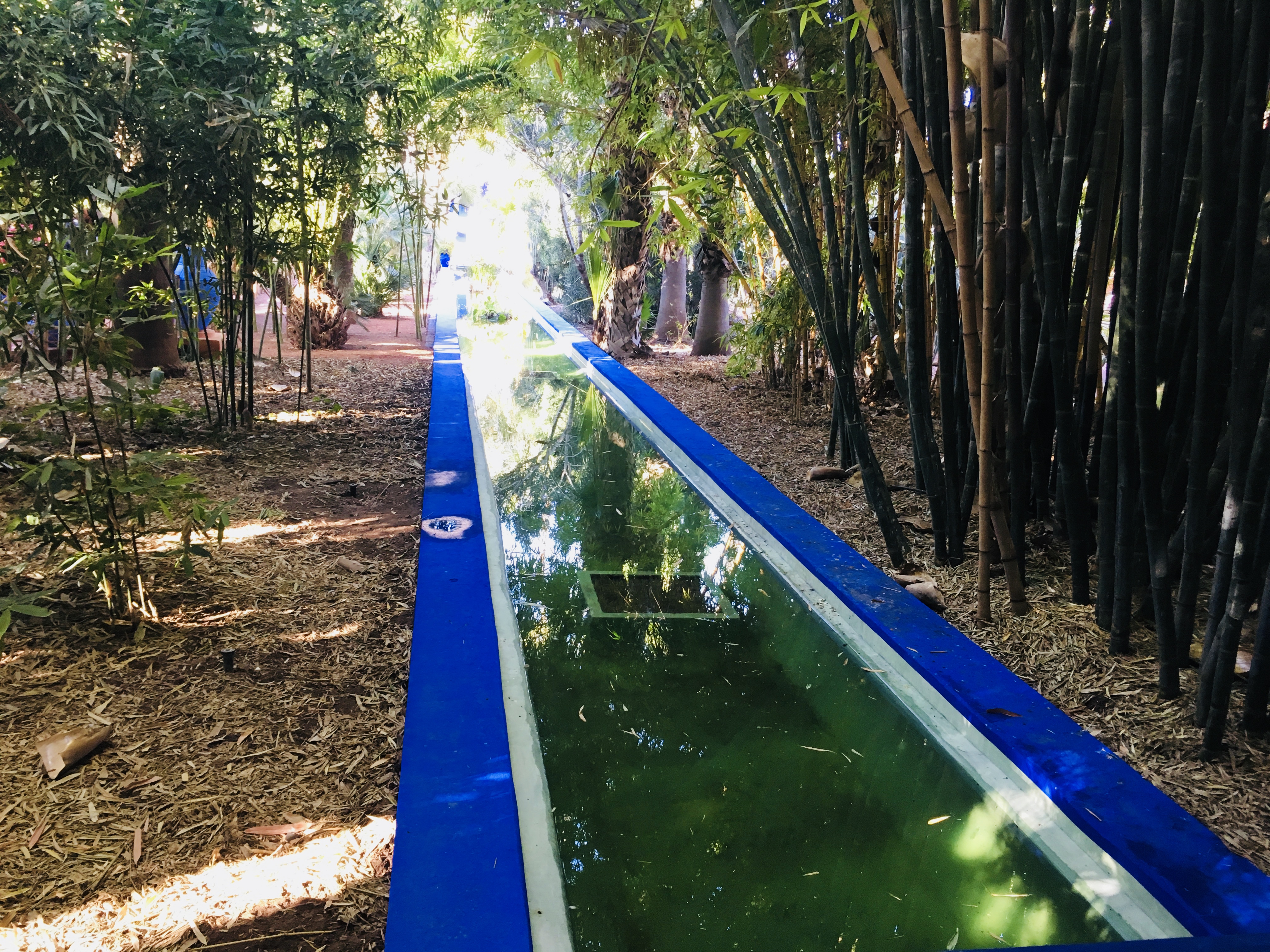 Meandering paths of terracotta take you through glades of enormous cacti, past lily ponds and fountains and water channels cut through a majestic bamboo forest. There are surprises and secret spots to sit and reflect in what feels like a tropical paradise away from the old medina’s crazy chaos. 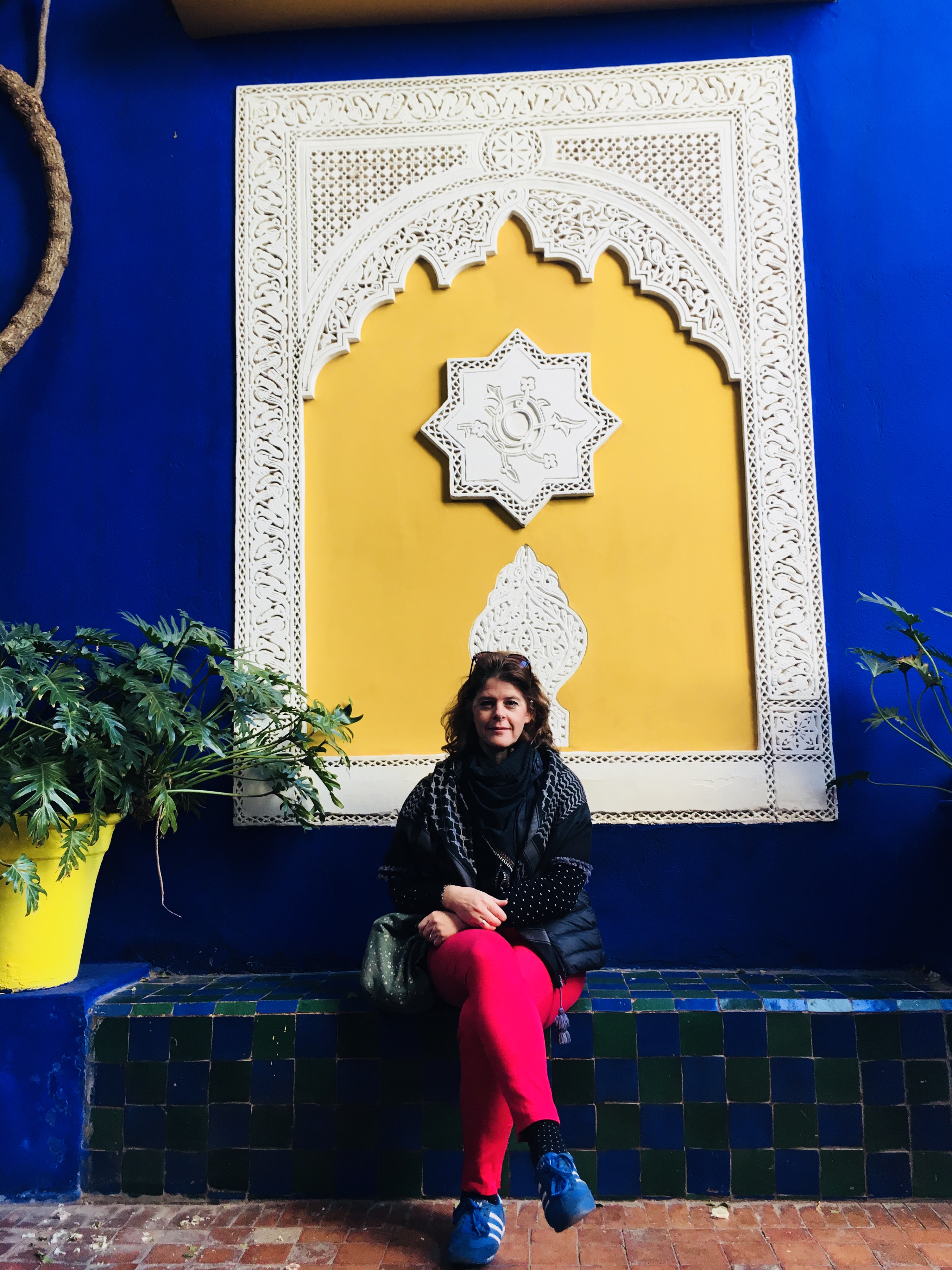 I wandered slowly, some way behind my guide and his mother, taking photos as I walked and absorbing the scene. It seemed with every step that a new masterpiece framed itself before me. Vibrant yellow planters and terracotta columns are woven together with bright green towering cacti and tropical palms. 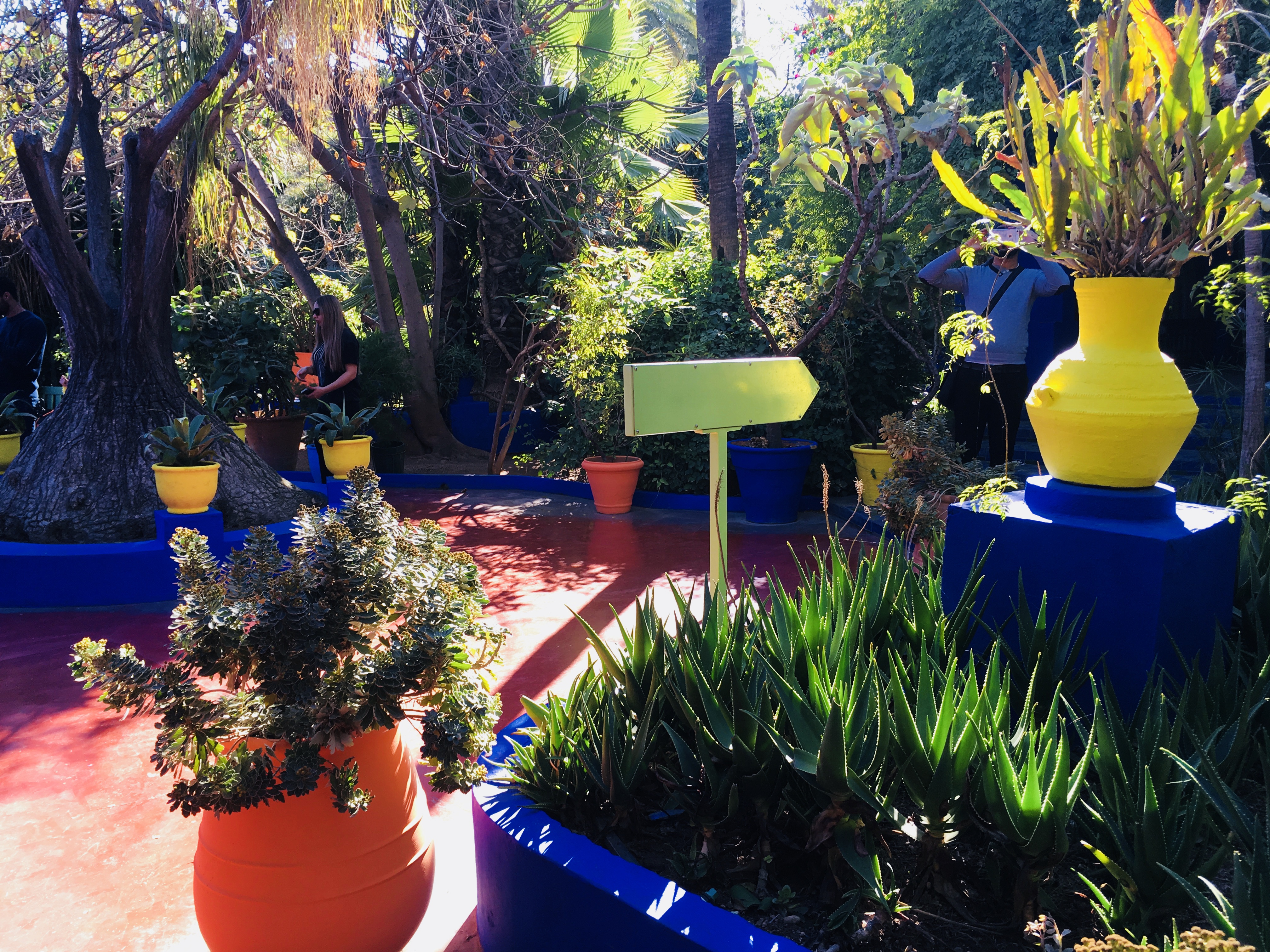 The backdrop of the Moroccan blue architecture allows the beauty of the planting to shine like a living light box. The bright pink bougainvillea petals danced in the warm breeze as they hung down from the corner of the blue house like a bride’s bouquet. 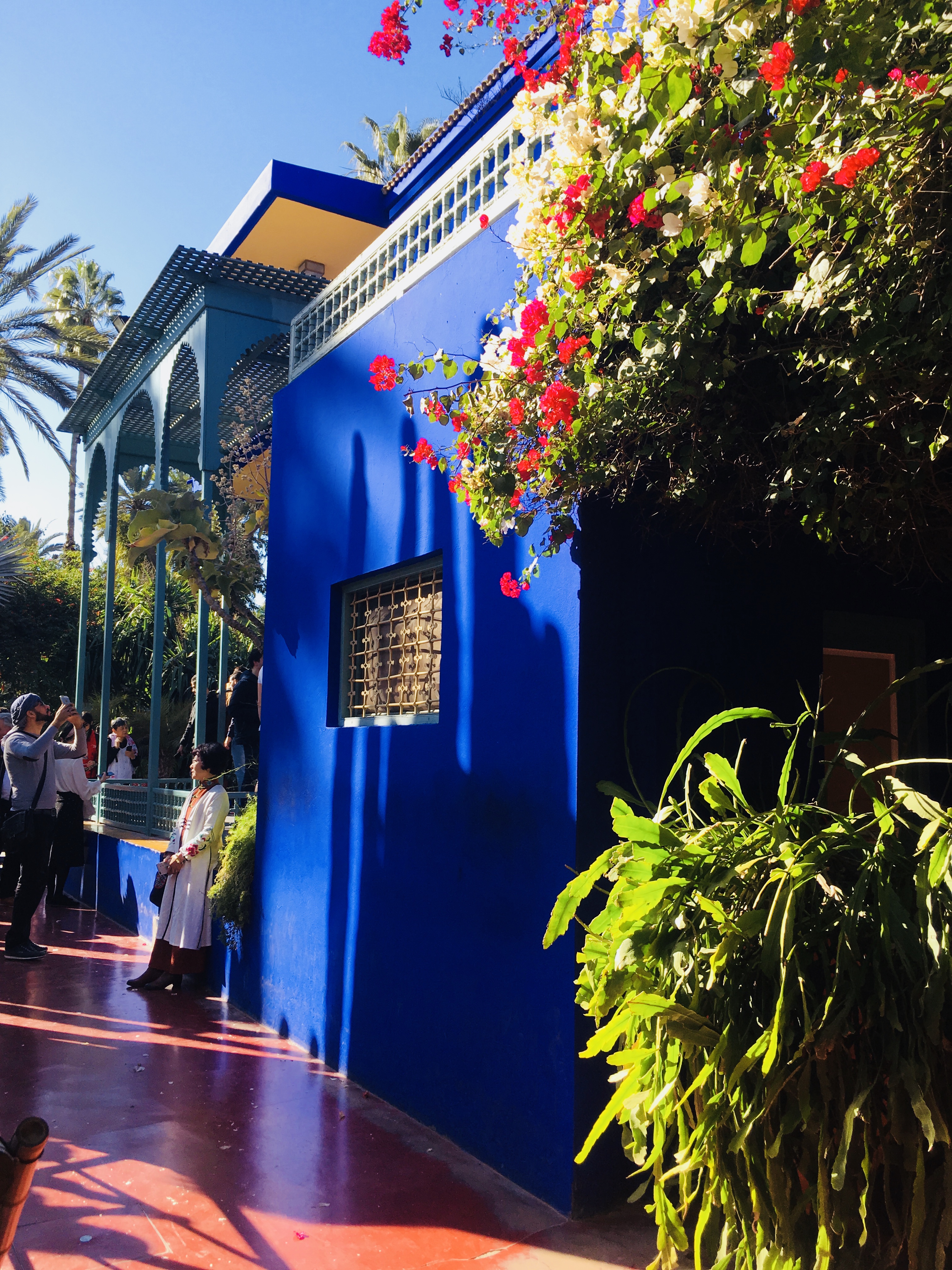 The nature of the space invites you to pause and daydream in the dappled sunlight beneath the shade of a coconut palm. Sadly, though, the serenity is rather disturbed by the number of tourists and their less-than-serene demeanour. There is a beautiful shop in one corner, selling stunning but overpriced clothes, bags and accessories. Nice to look, but leave the buying to others. 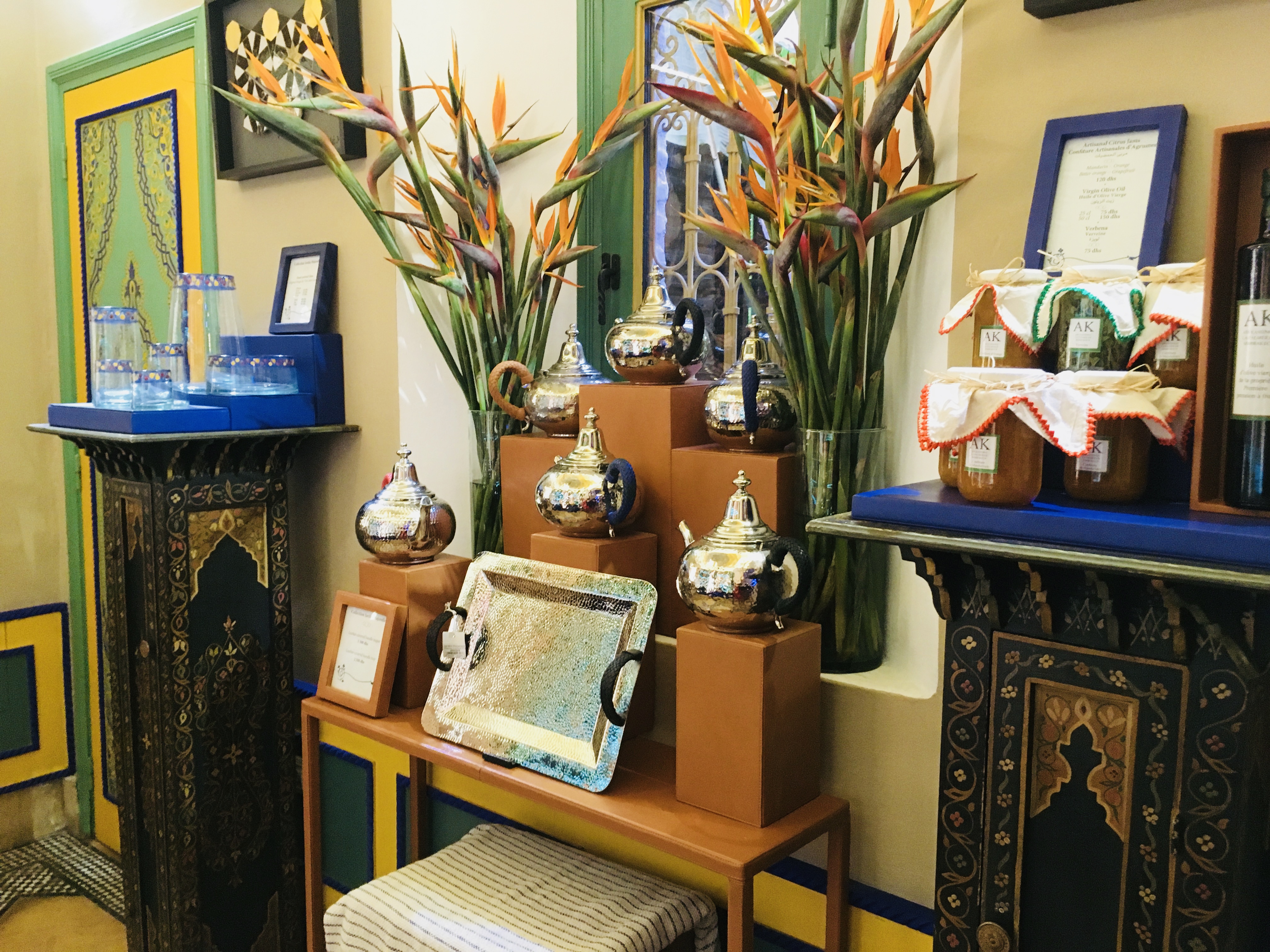 My visit inside the house and museum would need to wait for another day as there was quite a queue and Nour had another place on his list to take me. We headed further out of the city, towards the airport, to Menara Gardens and Pavilion. This area was established as a park in the 12th century and the pavilion built in the 16th century by the sultan, who used it as a summer residence. 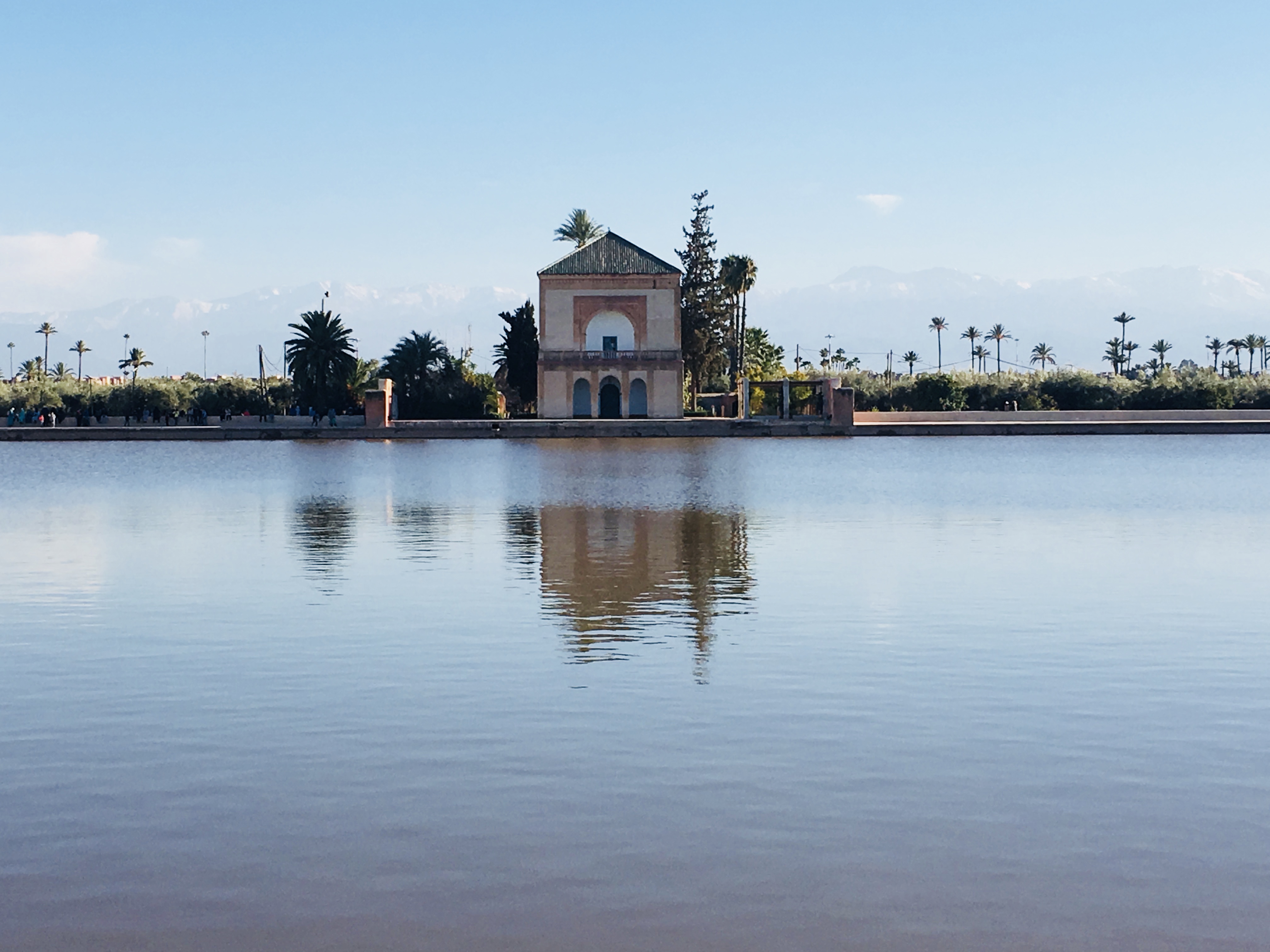 The manmade reservoir was built to irrigate the surrounding gardens using a complex system of underground channels which draw water from the Atlas mountains, approximately 30 km away. The area was thronging with families bringing picnics to share before the setting of the sun. 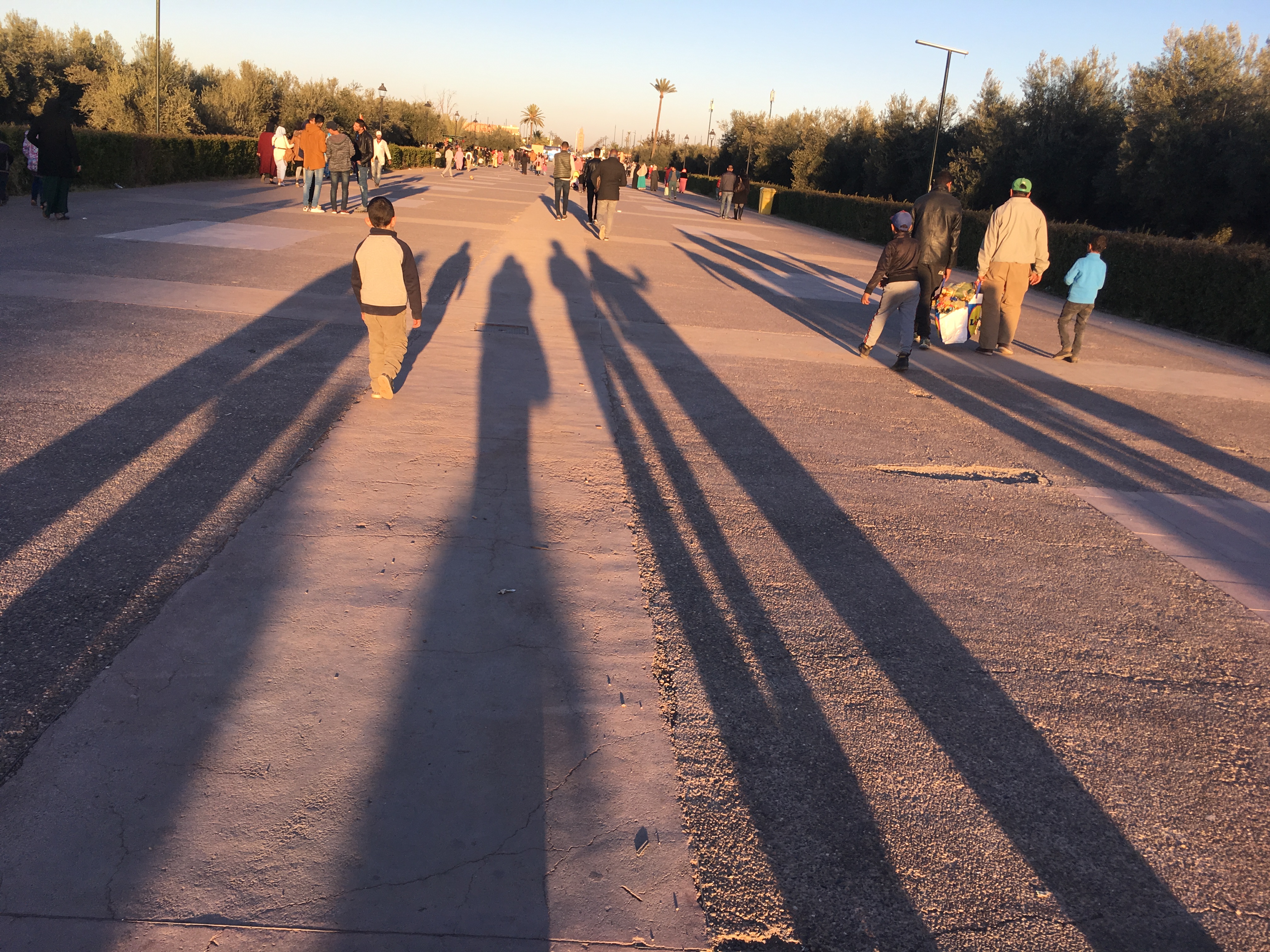 It was a fabulous atmosphere on a warm Sunday evening and we walked to sit at the end of the reservoir watching the planes coming in to land against the snow-capped mountain backdrop. After people watching for a while, we headed back through the olive groves towards the car, stopping at a corn stall along the way. 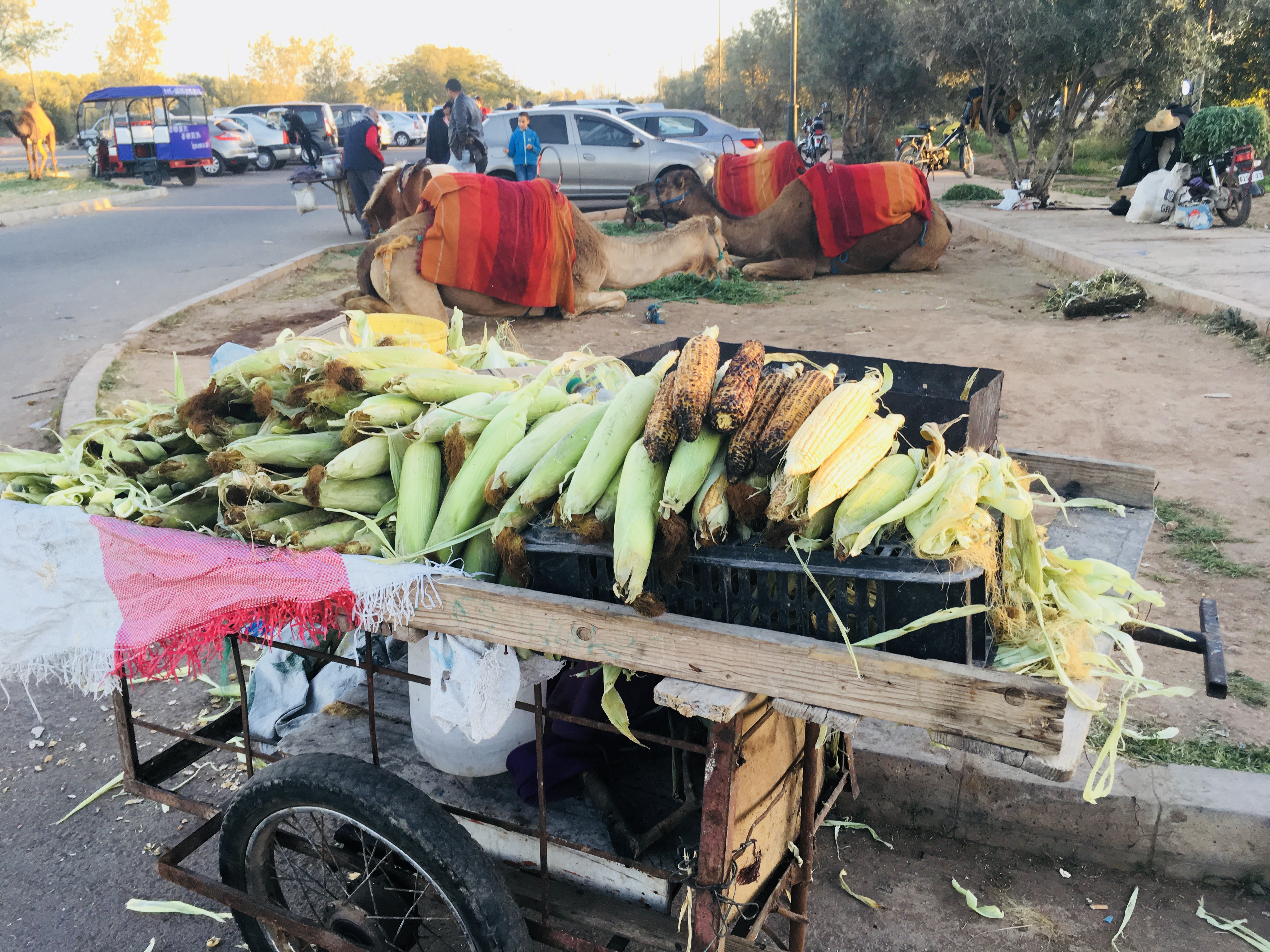 My head told me I hadn’t drunk coffee for at least a few hours, so we stopped at a street side cafe where we ordered the famous Moroccan Nos-Nos (which means half and half). It was a delicious creamy coffee served in a glass; half espresso, half creamy milk. It is all cream at the bottom, dark espresso in the middle and a froth on the top, and it was just what I needed. 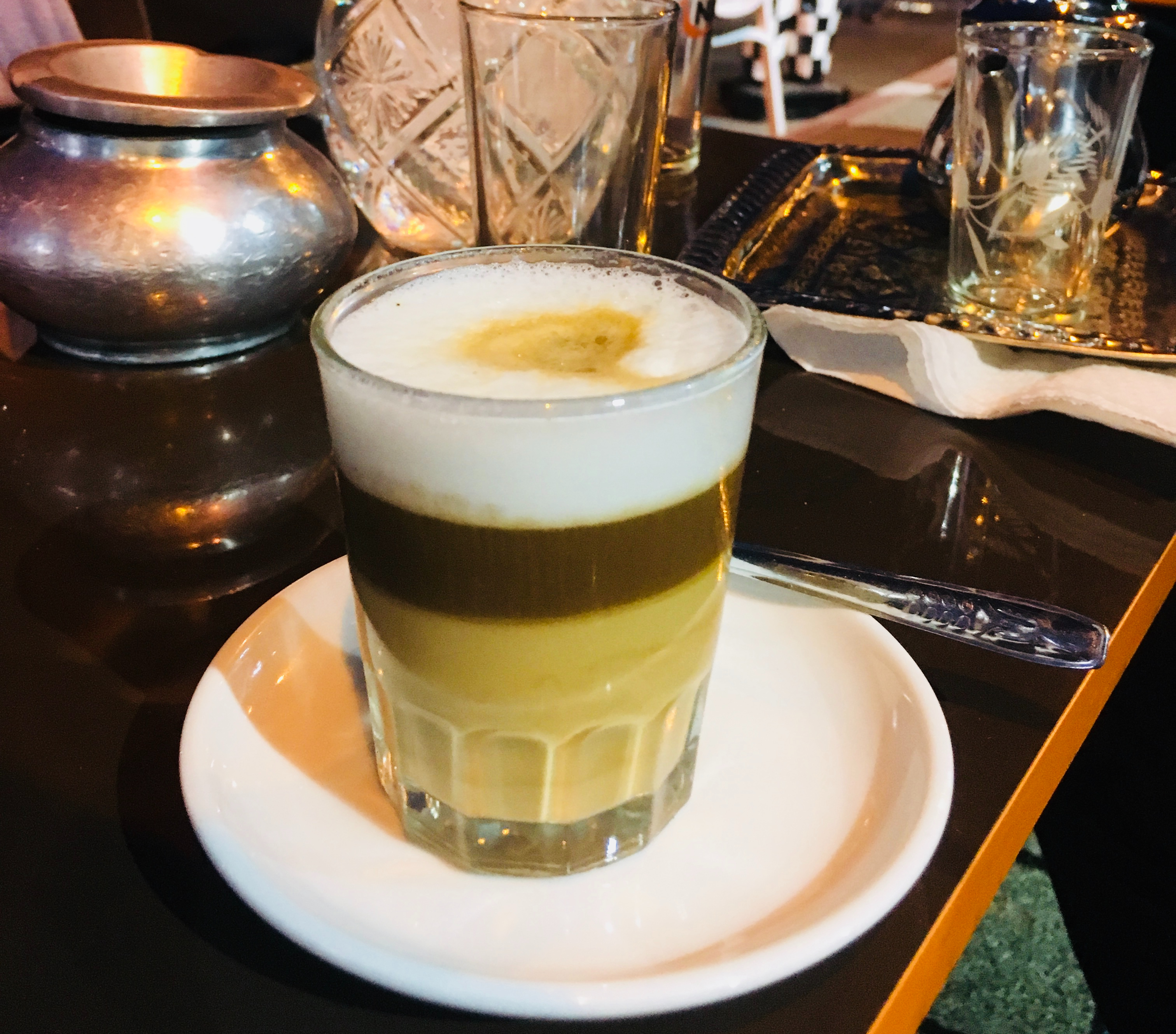 It was dark now and without the warmth of the sun, the temperature had dropped sharply. My cold hands wrapped around the glass of hot creamy coffee comfort, and as I drank my withdrawal headache softened. I relaxed and chatted with Nour as we watched the horse drawn carriages carting giggling tourists around and around the block. 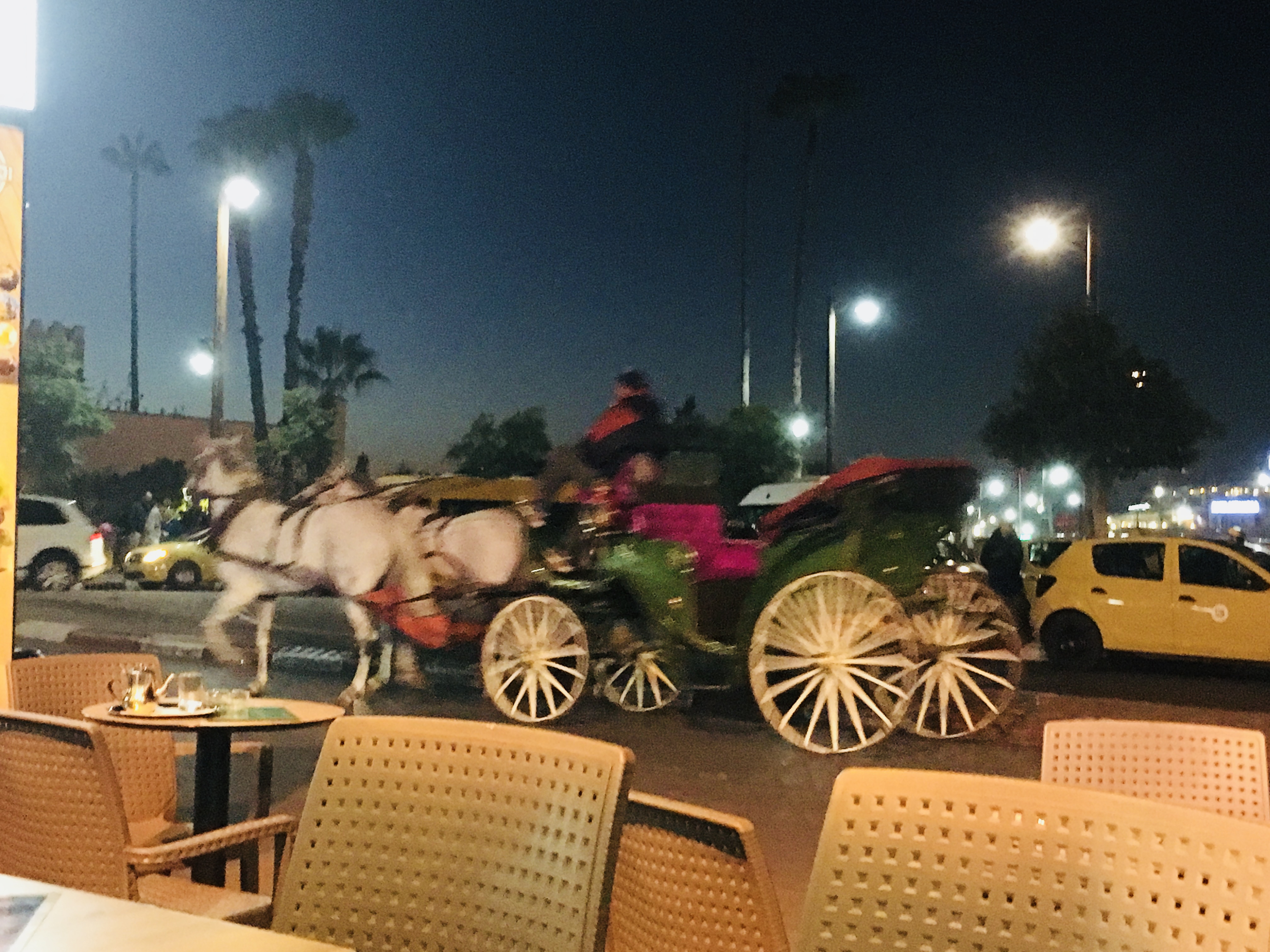 After some BBQ sticks among the snake charmers of Jemaa el-fnaa, we headed back to the Riad for another chilly night’s sleep before our early start the next day when we would be driving through the Atlas Mountains.